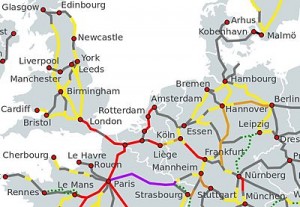 The North Rail Corridor is the missing link in the Trans European Network – Train . Supposed to be optimal interconnected all regions within the EU in the opinion of the European Commission

As the card shows the image for the high-speed lines in Northwest Europe there is a hole from Amsterdam to Hamburg. This causes too much pressure on a number of nodes on the track . That did not have to come .

If more direct trains come to ride .Now the current time with www.nshighspeed.nl is 5 hours and 23 minutes . This is not a competitive offer in relation to the car and the airplane. The travel time for Schiphol – Hamburg, the missing part of the HSR version of the North Rail Corridor belongs to 2 hours and 23 minutes to lie .

The city of Hamburg attracts daily 1 million people in the city and going out. Population in the 2nd city in Germany . Later two million inhabitants . In the Metropolitan Region of Hamburg now live 4.6 million people . On the way there we also pass during the Metropolitan Region Bremen -Oldenburg big 1.2 million people . Ingratitude population decline over Germany remains an interesting area to be. Associated with high Now what did not happen in the current time . By car well . By plane well , but bad by train . The bottleneck stations are Osnabrück , Oldenburg , Bremen and Hamburg in Germany . For Groningen Netherlands , Almere , Amsterdam and Schiphol East .

The landside accessibility of Schiphol is not taken into account shifting flights to the short range to high-speed trains . This picture is emerging throughout Europe . Where an HSL connection appears the number of flights rap disappears. On some routes, the HSL takes over the function of the airplane . Yet another reason that the North Sea Corridor should be . Develops Especially as a rail corridor . The city of Groningen has been decades in the top 10 cities in the Netherlands . Even in the 50s of the last century, its adequate connection remember. Both the NS and the Deutsche Bahn

This is clearly seen at the following link : http://en.wikipedia.org/wiki/Trans_Europ_Express It has also been unable to connect to Hamburg via Groningen .

In the current time of a growing Europe together and reduce travel time by train . It connects really make sense . But by then dominated by the State-owned public transport market , there never has been any development of this route . According to DB Ag in the current time there is no need for this connection via the North? I think the average marketer thinks otherwise. The famous white spot in the operations? Slowly, because liberalization of the track it is possible to require access to and go . further competition with See the following link http://ec.europa.eu/news/transport/130130_en.htm . It also offers opportunities to crank . Debate on the North Rail Corridor on the region

If a region has the right to have good electrical connections, it is the Northern region of the Netherlands. Northwest Germany , the same applies . http://nl.wikipedia.org/wiki/Intercity-Express . Here, the thinking at the Deutsche Bahn also in Bremen . Logically extrapolating from Oldenburg and Groningen to Amsterdam Airport Schiphol . This eliminates a major bottleneck to correct Arnhem – Utrecht in the Dutch network . That certainly already rampant with its capacity to 2028 ?

This compound is also of importance for Rotterdam . Through another connection of Rotterdam – Stockholm . In recent decades trackparts no proper investigation about this transport route . The focus at this time from Rotterdam to Rotterdam – Genoa , Rotterdam – Lyon and Rotterdam – Warsaw Baltic States ( corridor2 ) . Precisely the goods version of the North Sea Rail Corridor relieves the existing intercity network properly . From Zwolle ,
hear the connection via Coevorden – Emmen – Stadskanaal – Veendam – Bad Neuschanz Germany to go . The bottlenecks especially in the Northern part of Germany on the North – South links tremendously . This concerns the route Hamburg – Hanover and Bremen – Hannover . The so-called Y – Trasse . The west come problems by JadeWeserPort . But this is the route Bremen – Osnabrück already suffering . What a logical solution is further duplication and overhead above Oldenburg – Cloppenburg – Osnabrück . Plus , the approach to the west. This is part of the North Sea off Rail Corridor . This is the route Oldenburg – Leer – Bad Neuschanz .

A major problem here is the so-called Frisian Brücke ‘ . This bridge is too small in capacity . Also, given the age of this bridge is to be replaced. http://de.wikipedia.org/wiki/Friesenbrücke . It is time that this connection will be brought recovers . A recent CBS survey shows that in Germany the Land of Lower Saxony , the second trade partner in Germany of The Netherlands. Why look you in the Randstad only to Corridor2 ? http://www.corridor2.eu/ This is not effectively utilize the space in the Netherlands and Germany . Through the North Rail Corridor the eastern seaports include the Land of Schleswig – Holstein are optimally accessible from the southwest of Europe .

Since the error range from the high-speed connection between Amsterdam and the Belgian border , the Dutch government got cold feet to invest in high-speed lines . Further research methods also appear to be HSL connections in the Netherlands. Not quite optimal In fact, the pieces from Schiphol to the limit no more than important links in a much larger network . This wrong is necessary to research methods . As is common in the Netherlands think. Tiny , yet capital intensive projects Especially in the road infrastructure . Examples are legion found